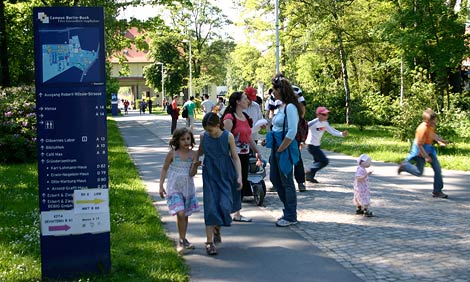 Berlin-Buch, today one of the largest biomedical locations in Germany, is a symbiosis of tradition and modernity where research and medical treatment are closely linked. For more than one hundred years Buch has been making medical history.

At the beginning of the 20th century, five large properties were developed into the largest and, at that time, most modern hospital complex in Europe. They were built according to the plans of the legendary municipal building director Ludwig Hoffmann. Even today, the publicly accessible areas of the former hospitals and nursing homes impress the visitor due to their spacious park areas and pleasantly proportioned buildings, which contain elements reminiscent of the Baroque and Classical period.

You will see a mixture of buildings from different eras on the research campus – from the first laboratory buildings to today’s ultra-modern and architecturally sophisticated buildings. Designed as a park, the green campus is an inviting place for walking. Along the different pathways are many works of art, such as "Two Lighthouses for the MDC" by the artist Olafur Eliasson.

The Schlosskirche, one of the four remaining Baroque churches in Berlin, is located in the center of Buch. As ensemble, the church, castle park and municipal estate represent the early history of Buch.

For those seeking leisure and relaxation, the Buch Forest, which belongs to the Barnim Nature Reserve, offers paths for walking and hiking, biking and horseback riding. These paths run along the former sewage fields, where highland cattle and Konik horses graze year round.

Eckert & Ziegler with Sales Growth in the First Quarter of 2022

Eckert & Ziegler AG (ISIN DE0005659700, TecDAX), a specialist in medical radioisotopes, has entered into a long-term cooperation agreement with the Nuclear Physics Institute of the Czech Academy of Sc...

Where science turns into business