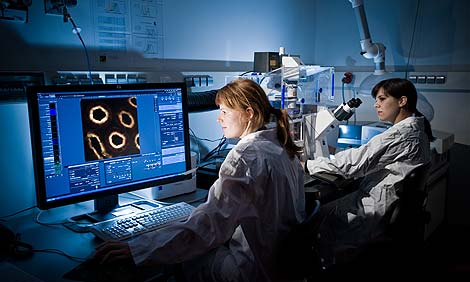 Excellent research, maximum and specialized health care, a knowledge-based economy and multifaceted education and training in the healthcare industry are distinguishing features of Buch. With its clear focus on biomedicine, the health location has outstanding innovation and growth potential. Berlin-Buch has been designated as a premier location for future development in the innovation strategy of the capital city region.

There basic and clinical researchers from academia and non-university institutions are closely interlinked, as are the hospitals, and biotech companies and medical technology companies. Altogether, as key employers in Berlin-Buch, they employ nearly 6,500 people in the health sector. In addition, the health location Berlin-Buch generates an annual value of 320 million euros plus an additional 227 million euros in demand effects in Berlin. As a consequence, over 7,500 jobs have been created in Berlin, resulting in tax revenues for Berlin of 13 million euros per year *.

Thanks to the public funding by the Federal Government and the State of Berlin amounting to 624 million euros**, the research campus in Berlin-Buch has an excellent scientific infrastructure, state-of-the art technology platforms and a biotech park with more than 60 companies. The renown of the science and health location attracts world-class scientists and is a magnet for new companies and enterprises.

This has meant that in recent years substantial private investments of 827 million euros have been invested in the region**. The HELIOS Kliniken group has established a maximum-care hospital in Buch and has invested 336 million euros** for this purpose. Thanks to the commitment of companies such as UKB Denkmal AG, COMBAG AG, Ludwig Hoffmann Quartier Objektgesellschaft mbH & Co. KG and the Widerker Group, historic hospital properties have been converted into attractive residential parks. Moreover, a shopping mall, the Schlosspark-Passage has been built in the center of Buch. Companies of the BiotechPark have attracted private investments, including hundreds of millions of euros in venture capital.

*Source: DIW Study “Gesundheitsstandort Berlin-Buch: Was ist der wirtschaftliche Nutzen für Berlin?“ [Health location Berlin-Buch: What is the economic benefit for Berlin?], 2008
**Up to and including 2015

MDC PhD student Matthias Jürgen Schmitt is being honored with the Curt Meyer Memorial Prize of the Berlin Cancer Society for his achievements in cancer research. He employs molecular reporters to inve...

PENTIXAFOR is an innovative imaging compound for the initial staging of cancer patients with symptomatic multiple myelomas. The Ga-68 based radio-diagnostic promises to significantly improve the patie...