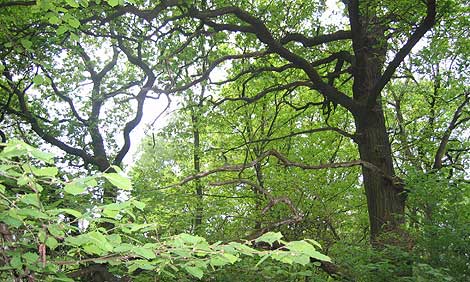 The Buch forest areas are part of the Barnim Nature Park. Of the 1,100 hectares, 600 belong to the state of Berlin, the rest to the state of Brandenburg. Buch is surrounded by classic high forest about 250 hectares in area. Directly adjacent to the forest are large irrigation fields of a now decommissioned sewage farm, which has been out of operation since 1984. Here a varied landscape has developed over the years, where meadows, semi-open forest, tall forb corridors, and wet and dry areas predominate. Due to the partial grazing with highland cattle and Konik horses, the extensive recreation area has gained yet another attraction.

Detailed information about the decontamination of the sewage irrigation fields and an audio guide about their history can be found here. 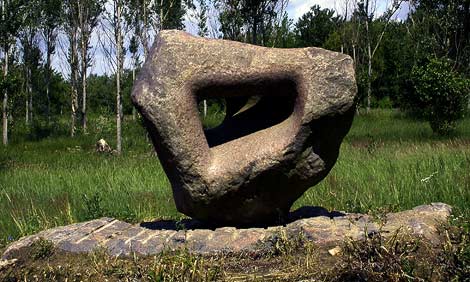 If you see sculptures in the woods by various artists, these are the results of the International Sculptors‘ Symposium "Sculpture Stones without Borders".
For details see the link below.

Network of Paths for Hikers, Riders and Cyclists 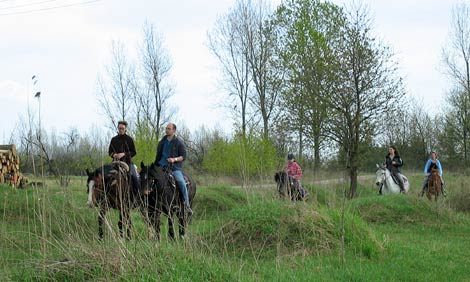 An extensive network of trails through the Buch Forest is attractive for hiking and cycling. The long-distance cycling path from Berlin to Usedom goes through Berlin-Buch. For riders, the open bush landscape with its developed bridle paths is particularly attractive. Many rare birds such as the kingfisher and the red-backed shrike as well as protected plants can be seen on the Buch meadows and wetland areas.

Several organizations such as the Nature Conservation Association and the Naturwacht park rangers regularly offer guided nature hikes. In the School-in-the-Woods in the Buch Forest near the forestry office, schoolchildren in particular and other groups can learn a lot about the forest and its inhabitants. 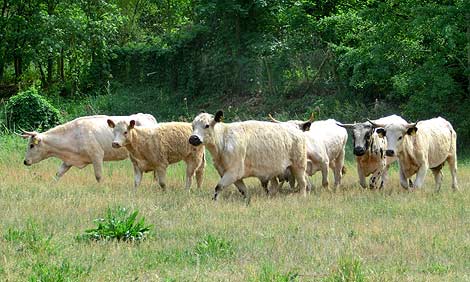 In the early 20th century the municipal estate Hobrechtsfelde emerged as one of the most modern agricultural production sites of the city of Berlin. Located on the northeastern part of Berlin’s sewage fields, it mainly supplied the hospital city of Buch with food. Here the sewage fields were used for the cultivation of vegetables. As the pollution of the wastewater increased, the fields were no longer used. Although the sewage irrigation fields were decommissioned in 1984, agricultural production continued in Hobrechtsfelde until German reunification in 1990. Then the 800-meter-long street village gradually became a purely residential area. The six-story sewage silo on the premises of the former estate is today an industrial monument.

The former sewage irrigation fields around Hobrechtsfelde, which as part of the Barnim Nature Park belong to the Berlin Forest, are equally valuable for nature protection and recreation. To preserve its diverse semi-open landscape, in 2011 a large-scale grazing project was launched with various robust cattle breeds and Konik horses. Around 200 animals graze throughout the year on ten fenced-in areas, spread out over 850 hectares. Hikers and cyclists can pass through these areas via swing gates and stiles.

Today, forest grazing is not part of classic forest management. In earlier times, however, it was a characteristic feature of the landscape in many parts of Germany. It promotes a cycle, in which grasslands give rise to scrub and then develop into bush (forest) and vice versa. This process is maintained by the ‘bite’ and the ‘step’ of the large grazers, whereby at any time all phases of the cycle can take place concurrently and habitats such as hedgerows, grassland, bush, shrub-dominated ‘mantel’ vegetation and woodland-edge ‘saum’ vegetation can form at new sites. Typical for this landscape are thorny bushes, in whose protection oaks displaced by lack of light from the forests can also colonize. The feces of large animals promote the biodiversity of the natural environment relatively quickly.

Ever since the 1980s, attempts have been made to reforest the sewage fields. This has only been successful on areas that have been stabilized with clay – a cost-intensive, complex method. Extensive grazing, by contrast, appears to be a relatively simple means to create an ecologically valuable area that is also attractive for tourism.

While small grazing projects are already taking place in different locations in Germany, the Berlin and Brandenburg foresters and nature conservationists are – figuratively speaking – venturing into uncharted territory. For the first time, such large forest areas with different vegetation and tillering as well as a different nutrient and water supply are used for grazing, and compared with each other.

The Association of Friends of the Barnim Nature Park plans to build a visitor center on the grounds of the former estate, which will have enclosed displays and an exhibition about the forest grazing project.

Download of the overview map of the project area  (PDF)

Eckert & Ziegler with Sales Growth in the First Quarter of 2022

Eckert & Ziegler AG (ISIN DE0005659700, TecDAX), a specialist in medical radioisotopes, has entered into a long-term cooperation agreement with the Nuclear Physics Institute of the Czech Academy of Sc...

Where science turns into business