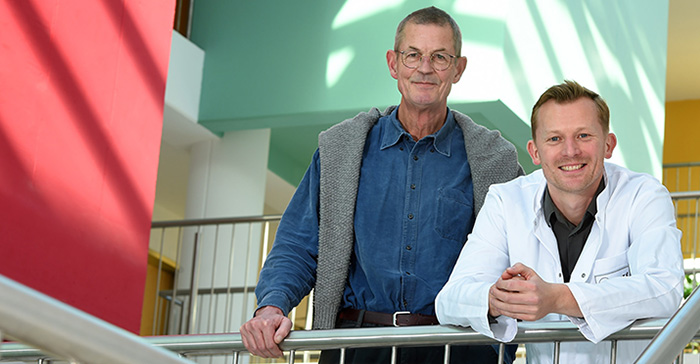 The human immune system is trained to distinguish between “self” and “non-self” and to destroy foreign structures. By means of anchor molecules (receptors) of T cells, it recognizes antigens of bacteria or viruses and thus can target and destroy such invaders. Cancer cells, however, are the body’s own cells, which is why the immune system does not mount an attack but instead tolerates them. A research team led by Professor Thomas Blankenstein has now succeeded in genetically altering human T cells so that their receptors can specifically track and destroy certain tumor cells.

Staff members of the Max Delbrück Center for Molecular Medicine (MDC), the Charité, Humboldt University and Medigene AG were involved in the research, and after more than ten years, their efforts have finally been crowned with success. Now, with these findings, the researchers hope to develop the first T-cell receptor gene therapy in Germany. In collaboration with Dr. Martin Vaegler and the GMP-Facility of the Experimental and Clinical Research Center, Professor Blankenstein is currently preparing the first clinical trial. It shall test the safety and effectiveness of T cell receptor-modified T cells that recognize a specific antigen called MAGE-A1. In adults it is expressed on tumor cells of a number of cancers such as multiple myeloma, a malignant bone marrow cancer. In this trial, patients with multiple myeloma will receive an infusion of their own T cells which were cultured outside the body and tweaked to target MAGE-A1.

The sterile preparation of the modified T cells takes place in the CMC laboratory (CMC stands for Cellular therapeutics Manufacturer for Clinical trials), which is jointly operated by the Charité and the MDC and acts as a bridge between academic research and clinical application. The lab space and the CMC staff are available to internal research groups free of charge. Thus, the drug production at the CMC for the researchers is much more economical than in commercial facilities. It often takes such special framework conditions to implement own clinical trials.

Dr. Martin Vaegler and the CMC team transfer the developed methods into manufacturing practice, which is supervised by the local authority, and perform the appropriate quality controls. The use of living cells as drugs is costly and effort-intensive and is associated with the highest safety requirements. To generate the specific T cells, an additional gene must be introduced into the T cells of patients by means of retroviruses. The entire process of processing the cells to the final drug product requires high precision and a very specific qualification.

A new, effective form of immunotherapy against cancer could result from the completion of this development together with its successful clinical testing.