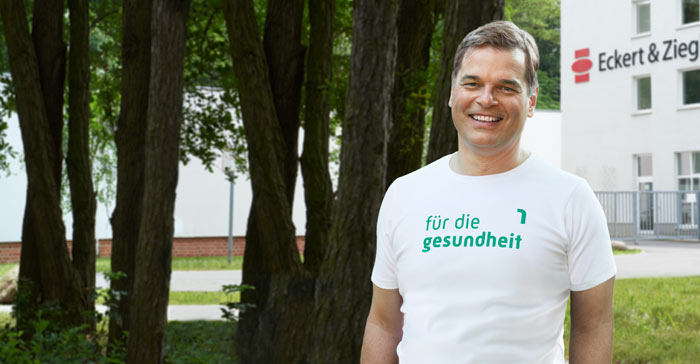 Dr. Andreas Eckert is not directly involved in research to find cures for diseases, but he has dedicated his career to the life sciences. His objective is to invest in promising companies in the early phase of their development, which he does with great enthusiasm. He has already invested start-up capital in approximately 20 companies in the fields of medical technology, biotechnology and the pharmaceutical industry. The Berlin-Buch location plays a pre-eminent role in his investments.

Three of the most important companies in which he participates through his venture capital and start-up financing company are located in Berlin-Buch. Eckert & Ziegler AG, a rapidly growing, internationally active company, and OctreoPharm Sciences GmbH both specialize in diagnostics and treatment using NMR technology. The third biopharmaceutical company is Glycotope GmbH, which has developed a method to optimize protein drugs and to produce highly specific antibodies against cancer. In 2010 the company received the Innovation Award Berlin-Brandenburg.

Campus Berlin-Buch offers all essential prerequisites Dr. Eckert needs for founding technology companies in the field of the life sciences. Here there is space for company settlement, and for him the special advantage of the location is that there are specialized buildings, suitable for the production of low-level radioactive components for cancer therapy and nuclear medicine diagnostics. The large network of scientists from many different disciplines is also an important factor for him. With the construction of the new headquarters for Eckert & Ziegler AG in Berlin-Buch, Dr. Eckert has made a clear commitment to the Campus. This is also reflected in his community involvement: The funding of the "Forschergarten" is his personal contribution to the Berlin-Buch location.

One of the many awards Dr. Andreas Eckert has received is the “SME Entrepreneur of the Year  2011“, which was  conferred in Cologne, Germany by a magazine for mid-sized companies. According to the magazine, Eckert “sets his own accents instead of chasing trends.” These accents can be seen on Campus Berlin-Buch.