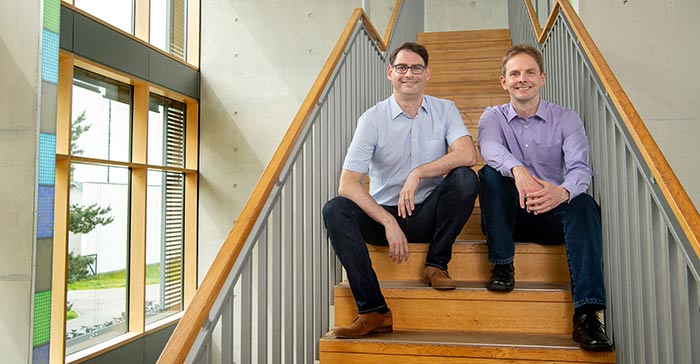 Magnetic resonance imaging (MRI) is a method for diagnosing diseases and monitoring the course of therapy. It produces sectional images of the human body without using harmful radiation. Typically, the water molecules of the tissue are exposed to a strong magnetic field. However, MRI is very insensitive and requires a high concentration of molecules to pick up a usable signal. Contrast media are often used to improve diagnostics in order to be able to visualize specific pathological changes more clearly. The contrast agents commonly used so far do not lead to the desired results, so that markers known from cell biology are not detected in the imaging. Dr. Leif Schröder and his team at the Leibniz Forschungsinstitut für molekulare Pharmakologie (FMP) have been working for some time on the development of a new contrast agent that is able to detect cellular changes, for example in cancer, even in very low concentrations.

This new contrast agent is based on the noble gas xenon. For this purpose, the research group employs a method involving powerful lasers in which the xenon is artificially magnetized and then – even in small quantities – generates measurable signals. In order to detect diseased tissue, the xenon, which is harmless to the organism, must be bound to it for a brief time. The binding takes place by means of modified peptides, which in turn are paired to "cage molecules". Biosyntan GmbH on the Berlin-Buch campus helped to realize this binding: Managing Director Dr. Stephan Pritz has known the FMP since he received his doctorate there. His company's expertise in highly specialized peptide synthesis and its proximity on the campus were key to the collaboration. In order to achieve the desired biochemical behavior of the novel sensor and to chemically design it in such a way that a modified peptide could be coupled, an intensive exchange of ideas was necessary right from the start – and the neighboring laboratory was close by.

During development, it was also important to conduct control experiments to ensure that the sensor actually works and to exclude the possibility that other mechanisms might be responsible for the binding. For this, peptides were designed as two different sensors – as a new, highly specific sensor and as a nonspecific peptide that does not interact. Potentially possible but unwanted interactions were provoked in advance to exclude them when using the sensor.

The ambitious goal of using xenon MRI in the future as a kind of biopsy replacement in humans is getting closer to realization. At the same time, the development of non-invasive technology can soon contribute to Berlin's efforts to further reduce animal testing in medical research.