Dr. Leif Schröder detects cancer cells with the aid of a noble gas 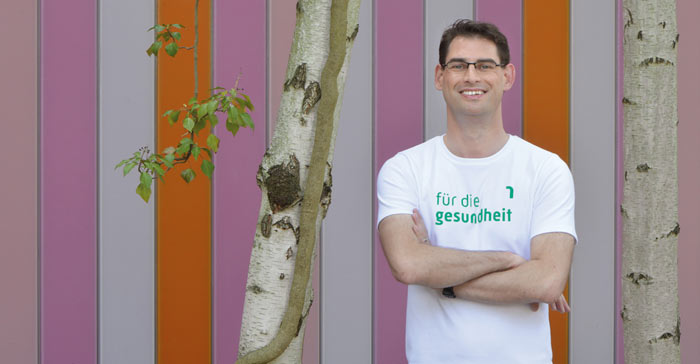 To make cancer cells visible for diagnosis, the medical physicist Dr. Leif Schröder uses the same xenon gas for his research that is used in the headlights of modern cars. The brightness factor of the gas plays an important role, and the gas is magnetically altered by laser. In combination with molecules, a biosensor is created that shall in the future serve as contrast agent at specific places in the body. The molecules bound to the gas conjugate in the body with cancer-finding moieties, e.g. in the lung. Figuratively speaking, the xenon gas only “spotlights” where the cancer cells are located. In combination with magnetic resonance imaging, the xenon biosensors enable precise imaging of pathological changes and this is possible at a much earlier stage than previously.

After receiving his doctorate in Heidelberg, Dr. Schröder went to the U.S. and began research on xenon gas and molecules. Since 2009 he has been leader of a junior research group at the Leibniz Institute of Molecular Pharmacology (FMP) on Campus Berlin-Buch. Here, together with his international team, he personally designed and built almost all the devices needed for his experimental setup. During his research stay at the university in Berkeley he received training at the workbench from which he still benefits today. Only the 150-watt industrial lasers and the corresponding control electronics were purchased ready-made. The heavy equipment is now in the basement of the FMP building.

Through his research on Campus Berlin-Buch he soon became an international expert in his field. Dr. Schröder was awarded a five-year Starting Grant of the European Research Council (ERC) for his project. In Germany he is one of the few scientists who work with this special technique. He continues to discuss the progress of his team with his former colleagues in Berkeley. And there are collaborations with other institutions on Campus Berlin-Buch and with a project of the Free University of Berlin.