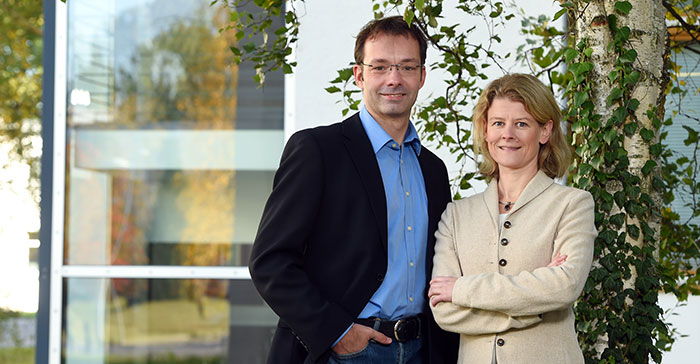 The prospect that the first clinical trials will lead to the successful treatment of patients inspires and motivates the team of OMEICOS Therapeutics GmbH. All previous data suggest that the scientists and founders have for the first time found a way to treat the cause of atrial fibrillation. Several drugs are available for symptomatic treatment, but they do not treat the cause of this cardiac disease. Robert Fischer, MD, and Dr. Karen Uhlmann are two of the five founders of the most recent spin-off of the Max Delbrück Center for Molecular Medicine (MDC).

The approach for the new active substance was developed by the MDC-research group led by co-founder Dr. Wolf-Hagen Schunck. In many years of research on the role of cytochrome P450 enzymes, the scientists came across an unknown metabolite of omega-3 fatty acids with anti-arrhythmic effect. Experiments revealed that this specific molecule is apparently responsible for the cardioprotective effects of omega-3 fatty acids. At this time, the cardiologist Dr. Robert Fischer was conducting research at the Experimental and Clinical Research Center (ECRC), which is jointly operated by the MDC and the Charité. He proposed using the new action mechanism for the treatment of atrial fibrillation – the most common cardiac arrhythmia in humans. In the laboratory of the third co-founder, Dr. Dominik N. Müller, ECRC, it was subsequently proved that the new drug candidate potentially exerts a healing effect on the heart. In its natural form, however, the active substance could not be used as a drug. It was necessary to develop stable synthetic molecules with the same effect. Finally, in collaboration with Dr. John Russel Falck of the Medical Center of the University of Texas Southwestern, the research team succeeded in producing synthetic molecules with a comparable chemical structure and function.

The researchers were aware that this success could potentially result in a breakthrough drug for millions of people suffering from the disease. For this reason, the MDC promoted the next steps within the scope of its internal “PreGo Bio” program. Within the framework of “PreGo Bio”, Dr. Karen Uhlmann, at that time a member of the staff of Ascenion, began to manage the project as technology transfer manager. She contributed her expertise in patents and contracts and found additional funding opportunities and suitable investors. Thus, the breakthrough was achieved.

In the summer of 2013 OMEICOS Therapeutics was founded, with a syndicate of investors securing the preclinical development of the active substance – a veritable success story. Today Dr. Fischer is one of the managing directors of OMEICOS along with Dr. med. Alexander Gebauer, and Dr. Karen Uhlmann as member of the management. In the future the active mechanism shall also be applied to other diseases, and a platform technology shall be established. All of the participants are cooperating to pursue this common goal.