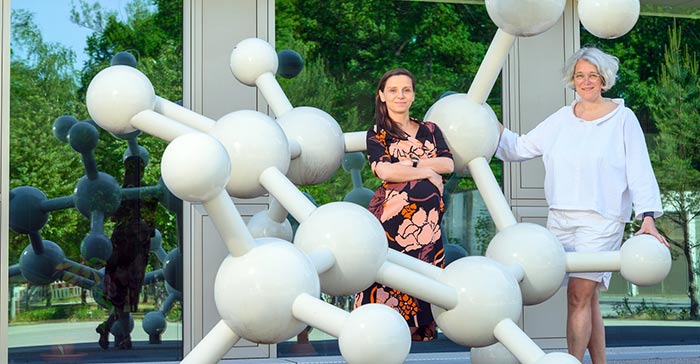 T-knife Therapeutics is one of the most successful start-ups in the biotech scene. Founded in 2018 as a spin-off of the Max Delbrück Center for Molecular Medicine (MDC) with the support of Charité – Universitätsmedizin Berlin, its mission is to develop therapies that can combat cancer with the help of patients’ immune systems. Over the course of many years, the research team led by Professor Thomas Blankenstein has worked towards genetically modifying human T cells in such a way that their receptors can target and destroy specific tumor cells. Using this unique technology, the first T-cell receptor gene therapy in Germany is now being tested in a clinical trial.

Co-founder and CTO Dr. Elisa Kieback and her team have catapulted T-knife to the top of the German biotech start-up rankings. The reason for this is the immense potential of the approach to enable the body's own defenses to recognize cancer cells as dangerous and to fight them specifically. Unfortunately, however, cancer cells are often tolerated by the body. The hope is that with the aid of T-cell receptor gene therapy, cancer can be treated far more effectively and with fewer side effects than has previously been possible. In 2020, the young company was able to raise 66 million euros in venture capital – the largest A-financing round of a German company in that year. T-knife will use the capital to search for further T-cell receptor candidates for various types of cancer. The researchers have discovered further promising antigens that occur in cancer. For this, the appropriate receptors are being produced and tested.

Elisa Kieback was able to enter the industry so successfully due to her expertise as an immunologist, her commitment, and her great interest in the application of this novel and promising technology. Since 2004 she has been working on gene therapies, especially T-cell therapies for cancer, first as a doctoral student and later as a postdoc at the MDC. In Professor Blankenstein's research group, from 2015 on she coordinated the preparation of the first clinical-academic study with genetically modified T cells, which was funded by the BMBF – Federal Ministry of Education and Research. Dr. Kieback has gathered detailed knowledge of the application requirements, from the preclinical phase to manufacturing and regulatory issues. Today, she contributes her expertise as Chief Technology Officer at T-knife, which in the meantime has more than 50 employees and is set to grow significantly.

Molecular biologist and management consultant Dr. Elisabeth von Weizsäcker has played a key role in the successful establishment of T-knife. She heads the Berlin-based technology management of Ascenion GmbH, which advises the MDC on technology transfer. Ascenion is a 100% subsidiary of the Life Science Foundation for the Promotion of Science and Research, which was established by research institutions. The company advises the MDC on the exploitability of groundbreaking research results and provides professional support to those who are planning to create a spin-off. Particularly important are also the contacts to potential cooperation partners, licensees and investors that Ascenion can mediate.

The first invention disclosure that Dr. von Weizsäcker reviewed for the MDC concerned the idea of novel cell therapy from the research group of Professor Blankenstein. Others were to follow. She recommended patenting them and later, when the technology was sufficiently developed, also creating a spin-off. In close exchange with the scientists and technology managers of the MDC, with patent attorneys and the patent office, she ensured that the patent applications were tailored precisely to the usability for the future licensees. For the MDC and Charité, Elisabeth von Weizsäcker and her team negotiated the license agreement with T-knife. The technology platform for the generation of cancer-specific receptors, various receptors and the rights to the results of the first Phase I/IIa clinical trial were out-licensed. Early on, Ascenion acquired shares in T-knife. As a result, it obtained a seat on T-knife's board and is also involved as a shareholder in new financing rounds. The MDC benefits from the success of T-knife both through direct licensing revenues and – in the event of an exit – through Ascenion's stake in T-knife , because the surplus generated by Ascenion flows largely back to the foundation and is available for new research projects.

What is the driving motivation for all involved? If T-cell receptor gene therapy proves to be safe and effective, it will represent a huge step forward for cancer therapy – one that began in a laboratory at the MDC some 25 years ago. To achieve this goal, Elisa Kieback and Elisabeth von Weizsäcker are working together in a close network to advance T-knife.